Home / Key Gold Headlines / The Everything Bubble Is Going to Pop

The Everything Bubble Is Going to Pop We talk a lot about bubbles in the economy.

Over the last few weeks, we’ve discussed the stock market bubble, the housing bubble, the auto bubble and the debt bubble.

Nick Giambruno simplifies things in an article he recently wrote for the International Man. He just calls it the “everything bubble.” And he says it will pop in the near future thanks to the Federal Reserve.

Interest rate tightening is the pin that will pop the everything bubble. After all, artificially low interest rates  blew the bubble up. As Giambruno pointed out, nearly every Federal Reserve rate-hiking cycle has ended in an economic crisis.  Specifically,  16 out of the last 19 times that the central bank has initiated a tightening policy has ended with some sort of crisis that tanked the stock market. 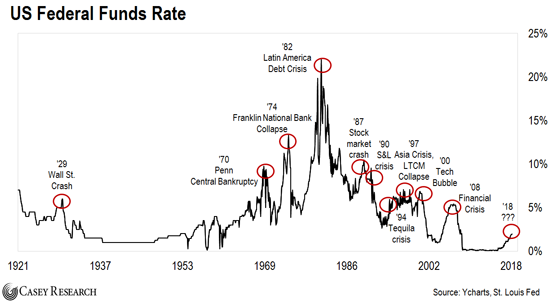 To start, the Fed encourages malinvestment by suppressing interest rates lower than their natural levels. This leads companies to invest in plants, equipment, and other capital assets that only appear profitable because borrowing money is cheap. This, in turn, leads to misallocated capital – and eventually, economic loss when interest rates rise, making previously economic investments uneconomic. Think of this dynamic like a variable rate mortgage. Artificially low interest rates encourage individual home buyers to take out mortgages. If interest rates stay low, they can make the payments and maintain the illusion of solvency. But once interest rates rise, the mortgage interest payments adjust higher, making them less and less affordable until, eventually, the borrower defaults. In short, bubbles are inflated when easy money from low interest rates floods into a certain asset. Rate hikes do the opposite. They suck money out of the economy and pop the bubbles created from low rates.”

We’ve seen this process repeated over and over again – we had the dot-com bubble, we had the housing bubble and now we have — as Giambruno puts it — the everything bubble. Or, if you prefer to look at it another way, we have a whole slew of individual bubbles floating around in the economy.

This should come as no shock. After all, the Fed held interest rates at zero for seven years and launched three rounds of quantitative easing. (In effect, money printing.) That led to trillions of dollar created out of thin air available to blow up bubbles.

Consider this — the Fed pumped up the housing bubble that precipitated the 2008 crash with about two years of 1% interest rates.

The Fed began the current tightening cycle in December 2015. We’re already seeing rumblings in the economy. Air already appears to be leaking out of the housing bubble, the stock market bubble and the auto bubble. Peter Schiff has been saying it’s obvious the recession is coming.

Giambruno thinks so too.

The US economy and stock market are overdue for a recession and correction by any historical standard, regardless of what the Fed does. But when you add in the Fed’s current rate-hiking cycle – the same catalyst for previous bubble pops – the likelihood of a stock market crash of historic proportions, before the end of Trump’s first term, is very high.”

Giambruno said he’s not in the habit of making “doomsday” predictions. But the fact is the Fed has warped the economy more drastically than it did during the tech bubble, the housing boom or even the 1920s.  As a result, the crash will likely be much bigger.

Are you ready for it?