SchiffGold’s Precious Metals Specialists are trustworthy and knowledgeable advisors who understand and share Peter Schiff’s investment philosophy. We believe passionately in the importance of sound money and take pride in helping customers secure their financial future against a global currency crisis.

Offering customers an easy way to invest in precious metals at low prices is of utmost importance to us. Our Specialists are more than happy to explain the different products available, and make recommendations that suit your personal needs. 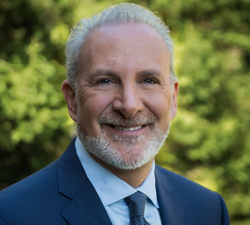 Peter Schiff is an internationally recognized economist specializing in the foreign equity, currency and gold markets. Mr. Schiff made his name as President and Chief Global Strategist of Euro Pacific Capital. Since selling SchiffGold in 2016 to Goldmoney, Peter has served as honorary chairman. He frequently delivers lectures at major economic and investment conferences, and is quoted often in the print media, including the Wall Street Journal, New York Times, L.A. Times, Barron's, BusinessWeek, Time and Fortune. His broadcast credits include regular guest appearances on CNBC, Fox Business, CNN, MSNBC, and Fox News Channel, as well as hosting his own weekly radio show, Wall Street Unspun. He is also the author of the bestselling books: "Crash Proof," "The Little Book of Bull Moves in Bear Markets," and the recently released: "Crash Proof 2.0: How to Profit from the Economic Collapse".

Matt has worked for SchiffGold almost since day one back in 2009. Matt co-chairs Schiff Gold's High Net Wealth desk. Designed to personally assist those individuals and businesses investing $250,000 or more. He has helped tremendously with the company’s growth and direction throughout the years. He was formally educated at Cornell University’s School of Hotel Administration. During his time at Cornell, he found himself challenging the Keynesian economic philosophies put forth by his classmates and professors. He studied Austrian economics on his own, and followed sound money writers such as Peter Schiff. While still in college, he made his first investments in gold and silver. That passion for gold and silver led Matt to pursue a career in the precious metals industry. The day after graduation from Cornell, he co-founded a precious metals company. After a successful start, Matt sold his portion of the company to help care for his ill mother. Matt has continued to take on more and more leadership roles as the years have gone on. He has ascended from junior broker to senior precious metals specialist to managing director. His current role is Executive Director overseeing all of SchiffGold's operations, hiring and directing crucial decision making. Matt and his wife Kaitlynn are proud parents of three children. Matt serves as one of the founding board members on the NYC board of Fellowship of Christian Athletes (FCA). In his free time Matt enjoys sports, exercise and health food.

As Executive Director, Jonathan oversees the growth & development of SchiffGold and works closely with high net worth investors and institutional clients. He started his investment career at Euro Pacific Capital headquarters in Westport, Connecticut, where his experience included work with The Perth Mint Gold Certificate Program. In September 2011, he joined SchiffGold in midtown Manhattan to continue his passion for sound money and honest, personalized customer service during uncertain economic times. Jonathan is a student of the Austrian School of economic thought, including a strong critique of current monetary policy and the central banking system. Using both technical and fundamental analysis, Jonathan works closely with his clients to not only build a position but also form an exit strategy when gold ultimately reaches the end of its bull cycle. Jonathan is a graduate of the Kelley School of Business at Indiana University Bloomington and holds a FINRA Series 7 license. He enjoys tennis, travel, and trading.

Fabian was introduced to precious metals investing as a tool for wealth preservation through the 2008 Ron Paul presidential campaign. Congressman Paul’s stark contrast from the other candidates and his unconventional economic views led Fabian to the Austrian School of Economics and the writings of Ludwig von Mises, Henry Hazlitt, and Murray Rothbard. He made his first physical precious metals investment when he was 17 and has been actively investing since. Fabian graduated from the New York Institute of Technology’s School of Management with a Bachelor’s in Business Administration & Finance. Fabian has 13 years of experience investing in precious metals on a personal basis. He enjoys fitness, cooking, and piano.

Joel is a life-long student of the financial markets and a passionate believer in precious metals. He holds a master's degree in Financial Economics, and has worked in finance for more than 10 years. Joel started following Peter Schiff after hearing his speech at the 2006 Western Regional Mortgage Bankers Conference, in which Peter correctly forecast the real estate bubble. Peter’s precious metals advocacy, combined with Joel's Austrian-influenced graduate studies, led Joel to believe in the key economic role and monetary significance of gold and silver. As a volunteer Sunday school teacher, Joel has a natural passion for teaching and sharing truth. Joel enjoys spending his spare time with his wife, Emily, playing croquet, and swimming.

Since the 2008 financial crisis and the subsequent bank bailouts, the arguments of free market thinkers like Henry Hazlitt, Thomas Woods, and Frederic Bastiat convinced River of the importance of a stable form of money. River was initially drawn to Bitcoin as an alternative to fiat money and has since been a believer and investor in both cryptocurrencies and precious metals. River is originally from Canada and prior to working at SchiffGold he worked as a teacher in South Korea for 3 years. He graduated from Carleton University with a degree in Mathematics and he enjoys golf, hockey, running, and cooking.

Matthew first discovered Peter Schiff during his time in college through Peter’s books and radio show. Between following Peter and studying Austrian economics, Matthew learned to appreciate the value of sound money and has been a proponent of precious metals since. Matthew is proud to be part of a company that practices what he believes in. He enjoys educating others on precious metals and helping investors preserve their wealth. Matthew attended Monmouth University in New Jersey and graduated with a degree in Business Administration and Finance. He has been working with Schiff Gold since January of 2020. He enjoys fishing, the beach, and spending time with friends and family.

As a long-term student of finance and economics, William was initially introduced to Austrian thinking in 2019, where he found himself opposing the economic principles previously taught in his schooling. "Peter, to me, served as the light at the end of my ‘economics-tunnel’," William says. Influenced by the likes of Ludwig von Mises, Carl Menger, and Peter Schiff, he joined the team not only to work closely with like-minded individuals, but also to further his own understanding of Austrian Economics and hard, sound money. He made his first financial investment at the age of nine and now holds a healthy percentage of his net worth in physical precious metals. When he isn't studying charts or trading, in his free time William enjoys soccer, golf, and traveling.

Valerie is SchiffGold's Staff Accountant. She has over 30 years of experience in financial management, including long time experience at Big 4 Public Accounting Firm Price Waterhouse Coopers. She uses this experience and applies it to improve our business practices and strengthen financial control oversight. Prior to working at SchiffGold, Valerie worked as an Engagement Management Coordinator at Ernst & Young, and then as an Accountant at Innovation Ads. In her free time, Valerie enjoys spending quality time with friends and family, shopping, decorating, and music.