Home / Key Gold Headlines / What Does the Ballooning National Debt Mean to You?

What Does the Ballooning National Debt Mean to You? 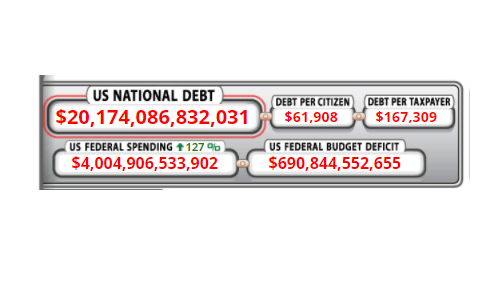 When Pres. Trump signed a bill raising the debt ceiling limit for the next three months, it instantly added approximately $318 billion to the national debt, raising it to $20.16 trillion. And Trump wants to do away with the debt ceiling altogether.

It’s hard to even conceptualize $20 trillion. What does that mean to the average person? Just the Facts Daily put together some interesting data that helps put the soaring national debt into perspective.

The national debt is currently over 105% of total GDP. That’s the highest level in history except for  a two-year spike at the end of World War II. To personalize the debt a bit, consider this. It currently totals $61,889 for every person in the United States, or $160,247 per household. Looking at it in terms of household debt, it’s currently 35% higher than the average consumer household debt of $118,271. Household debt includes mortgages, student loans, credit card balances, and auto loans.

The biggest problem is the federal government can’t stop spending money. Inflation-adjusted tax revenue has risen slightly since the Second World War, but the spending level has soared through the roof.

As we discussed in a previous article, the massive national debt puts the Federal Reserve in a difficult position. It wants to “normalize” interest rates. But doing so would crush the US budget under interest payments. Analysts have calculated that if the interest rate on Treasury debt stood at 6.2% – their level in 2000 – the annual interest payment on the current debt would nearly triple to $1.3 trillion annually.

Contrary to what many journalists and pundits have alleged, there is a strong association between government debt and poor economic progress. Numerous media outlets have publicized a study said to disprove this connection, but the study actually shows what previous studies had found: GDP growth decreases by an average of about 30% when government debt exceeds 90% of an economy. The authors of this study, however, buried this data on the 10th page of their paper and wrote a deceitful overview, which the media parroted. Ever since the U.S. national debt exceeded 90% of GDP in 2010, inflation-adjusted average GDP growth has been 33% below the average from 1960–2009, a period that included eight recessions.”

Peter Schiff has said the massive debt could also spur on the dollar collapse. Removing the debt ceiling would remove the last speed bump slowing the runaway spending freight train. But Peter says at some point, that train will come to the end of the tracks.

You know what? It’s not going to work, because just because we decide that we have no debt ceiling, and we’re going to borrow as much money as we want – it takes two to tango. We need a lender in order to borrow. And if we get rid of the debt ceiling, we are sending a very powerful message to our lenders that we are never going to get our fiscal house in order – that the sky’s the limit as far as how much we’re willing to borrow. And now the lenders are going to say, ‘Wait a minute! We don’t want to lend anymore. We already own enough US Treasury bonds. And if you’re telling me your throwing all fiscal prudence out the window, and you’re just going to borrow as much money as possible, well we don’t want to lend in that environment. Certainly not in this ridiculous low interest rate.’”

So where does the government get the money? It will have to borrow more from the Fed.

And that means the dollar is going to fall through the floor.”

US government debt, along with consumer and corporate debt, is a huge elephant in the room that’s eventually going to go on a rampage. Sadly, it’s highly unlikely the politicians in charge will do anything about it. They’ll keep borrowing and spending and kicking the can down the road – that is until they run out of road.