Gold started July delivery activity as the weakest minor month since 2019. This showed a general lack of interest in the market. Considering the activity since then, it’s possible this was a signal of capitulation.

Since the start of the delivery month, activity in the July gold contract has exploded.

Net new contracts that were bought for immediate delivery have surged, causing total deliveries to reach 9,519. While this is below the recent blow-out month of March, there are two important things to note. Second, the net new contracts (shown below by red bar), is the largest volume since November 2020. 8,594 contracts have opened for immediate delivery. While the total is still below the November 2020 record, the chart below shows that this current month is actually ahead of where November 2020 was at the same time. Net new contracts typically trail off at the end of the month, so it’s not likely that this July will set a new record. That being said, almost 2k contracts have been opened in the last three days so it’s not impossible to see a new record. Looking at dollar delivery volume for July shows that this month is now the largest July ever. This year has eclipsed the July record by $50M and the month is not yet over. Another interesting data point is the bank house activity. BofA is back at it again! As a recap, the BofA house accumulated gold for most of 2021, in December there was massive delivery volume and BofA stepped in to provide supply for delivery, wiping out their 2021 purchases. BofA then spent 4 months building an even bigger position before going pretty quiet for May and June.

In July, BofA has been the major house account delivering out metal, totaling 4,490 contracts. This represents about the same amount they received in January, so BofA still has a deep pool. That being said, why their erratic activity? Why accumulate gold from Jan to April when the price was mostly above $1800 and then sell a large portion when gold drops below $1750. That equates to about a $50M realized loss. For BofA as a whole, that’s a rounding error, but the precious metals trading desk is taking it on the chin! Adding to the change in behavior is the recent inventory analysis, which showed the metal leaving Comex vaults has accelerated. This is especially strange given the current backwardation in the gold spot market. Since May 1st, nearly 4m ounces of gold have left Comex vaults! The last 10 days have seen an especially big move in gold leaving vaults. Jumping ahead to August shows open interest that is above recent history. It will be interesting to see what happens next week with the August contract. The COTs report shows that the recent surge in open interest has been driven by the short side, so it does not seem likely that August could see huge delivery volume. That being said, the initial data for July showed very weak volume and it’s quite possible a new record could be set for net new contracts. The chart below shows deliveries for the last several major months. Delivery volume has been falling after a big spike in December. Time will tell if August can reverse the trend. The futures market is in a fairly strong contango as shown in the chart below. This indicates that traders anticipate higher prices in the months ahead. The spot market remains in backwardation, however, which is very unusual to last this long. This, combined with the surge in net new contracts and the massive outflows of physical metal from Comex vaults indicates that smart money wants metal and not paper. Silver is still lagging behind gold. The chart below shows delivery for major months and July silver is still well below past months. While net new contracts are actually trending above other major months, it’s not by a wide margin. Furthermore, it cannot make up for the very low open interest that existed on First Notice (shown by the green bar above). Unlike gold, the house accounts are net receivers of metal so far this month and BofA has delivered out a mere 97 total contracts. Looking at dollar amounts, this July will be the lowest dollar delivery volume since July 2017 despite higher prices. One positive thing to note is that metal continues to leave Registered. Is it possible that delivery volumes have gotten so low because there is not much metal to actually deliver? August silver doesn’t look much better, trending well below most of the recent minor months. Last month did finish stronger than April but was still well below recent highs. One similarity between gold and silver is the spot market in backwardation. The chart below shows how last July was in strong contango and only dipped briefly in August as the contract neared expiration. 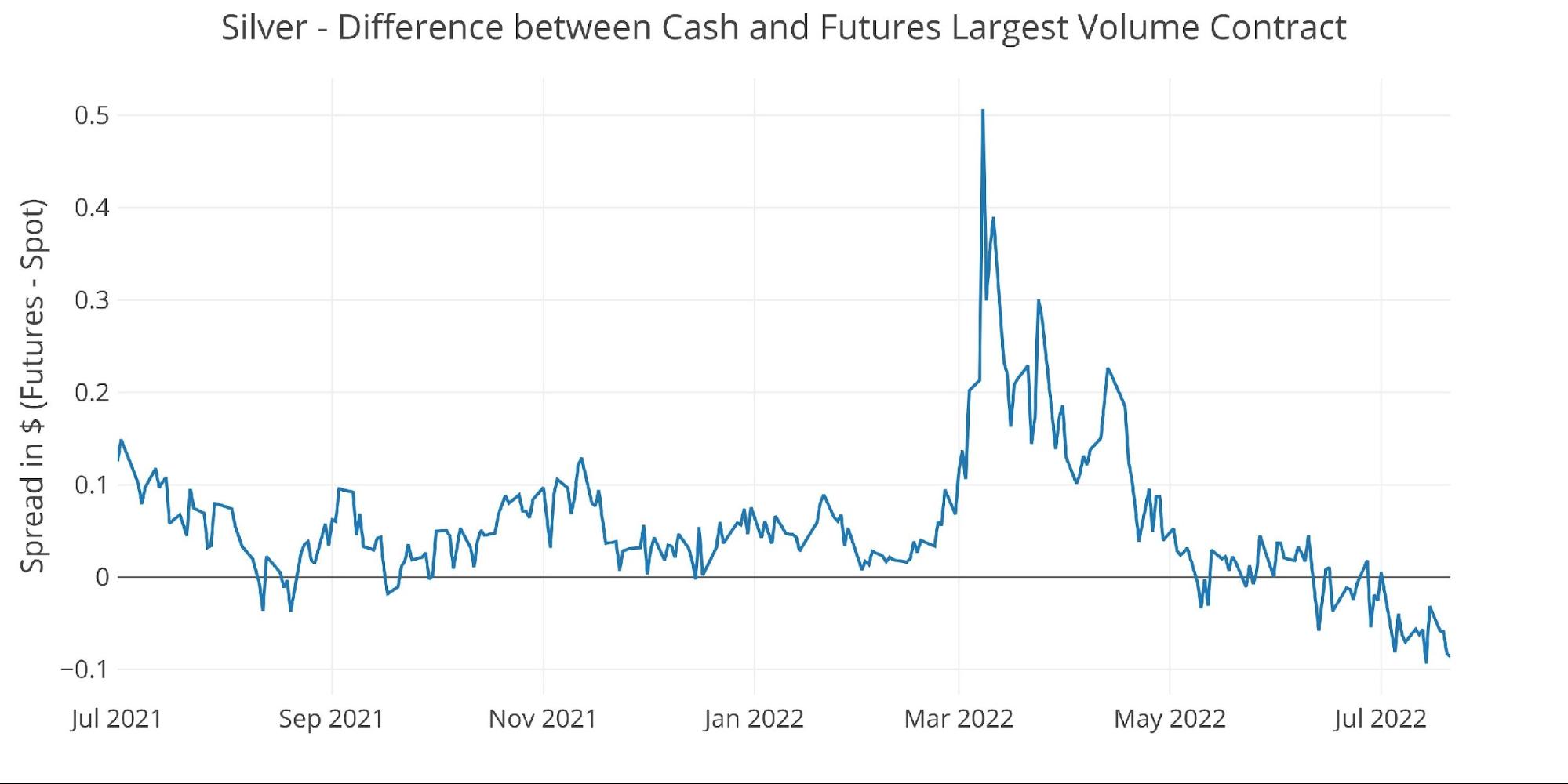 After a very weak start to the month, the recent action in gold is very encouraging. Strong demand for delivery, metal leaving vaults, and a market in spot backwardation all point to a market that is prioritizing physical metal over paper contracts.

While the price has been hammered by paper shorts, the underlying data shows that smart money is taking advantage of suppressed prices. Silver will likely follow gold at some point. With multiple indicators pointing towards recession, the Fed is likely to pivot soon. Even after the market blessed a 100bps rate hike next week, the Fed stuck to a message of 75bps. Why did the Fed not take the market up on the offer? Because they can’t.

There is too much debt and leverage in the economy. It is already buckling under the weight of the meager rate hikes so far. The Fed knows the economy cannot take much more tightening which is probably why they haven’t really begun QT. The market is starting to anticipate a Fed pivot but doesn’t want to start the party too soon. When the Fed dials down the hawkish talk, gold and silver could explode higher very quickly. The Federal Government ran a $211B deficit in July. Except for February, this was the largest deficit since last July when the Treasury ran a deficit of $302B, and it was the second-largest July deficit ever.
READ MORE →

The latest seasonally adjusted inflation rate for July came in nearly flat at -0.03%. This was on the heels of a blisteringly hot June number of 1.35%. While inflation did surprise to the downside, it had been expected to be much lower due to the fall in oil and drop in gasoline prices. The YoY […]
READ MORE →

US Debt: The Sting of Higher Interest Rates is Just Getting Started

The Treasury increased the total debt by $27B in June. Activity slowed in the latest month across all instruments, but particularly the conversion of short-term to long-term. After massive moves to extend debt maturity and shrink short-term debt by $530B over 4 months (shown below by the large negative turquoise bars), July went very quiet.
READ MORE →

Jobs Report: Be Careful What You Wish For

According to the BLS, the economy added 528k jobs in July, blasting past analyst estimates of 250k. The strong report comes on the heels of a Fed meeting last week that made a point to state they are hyper-focused on the job market as a sign of a weakening economy. The White House and Fed […]
READ MORE →

Is a Falling Trade Deficit Further Proof of Recession?

The June trade deficit fell for a fourth straight month to -$79.6B. While the deficit continues to drop from all-time highs, it is still larger than any month before 2022. June eclipsed December 2021 by $750M. December was a new record then, so the current deficit should be put into the context of longer history […]
READ MORE →