Just How Big Is the Gold Market?

With gold’s recent volatility and price drop, we’ve heard a lot of noise from pundits and analysts. Consequently, this seems like a great time to ask certain basic questions about this oft misunderstood market. For example, just how big is the gold market? Where does gold fit into the modern financial landscape? Why does gold still matter today?

To start, let’s consider the size of the global market for gold.

It seems like a lot, especially considering gold is one of the rarest elements on earth. We also have to consider that this figure may underestimate the actual supply. People began accumulating gold long before anyone was keeping track. Additionally, as China may well have recently demonstrated, no one really wants to talk too loudly about how much gold they actually own.

Of course, we should only include a portion of that total gold stock as part of the financial market. Jewelry makes up a significant percentage of the total gold stock – close to 50%. However, that figure can also be misleading. In many cultures, such as China and India, gold jewelry often serves the dual purposes of ornamentation and storing wealth.

But even discounting jewelry, the gold investment market is huge. Market capitalization stands around $3 trillion, even by conservative estimates. On top of that, we also must take into account all of the available gold-related financial instruments, including exchange traded funds, futures, derivatives, and OTC markets. The numbers become quite staggering when we take a deeper look into the size and volume of the gold market in its entirety.

To put the size of the global market for gold into perspective, consider the following graphs. 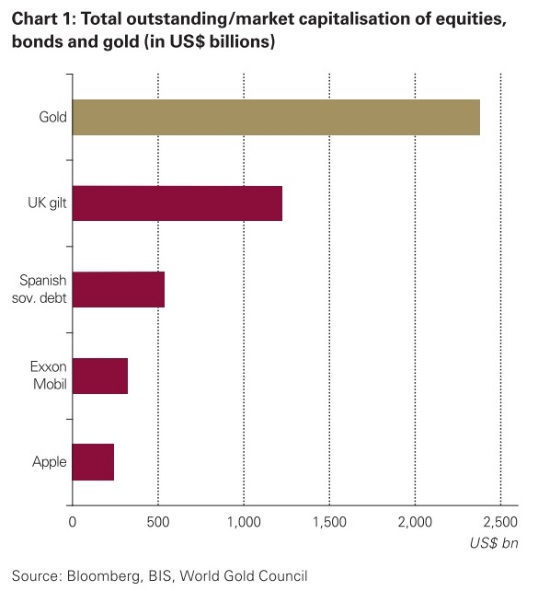 The sheer size of the gold market makes it one of the most readily available and accessible financial assets in the world, as the World Gold Council points out.

Gold ranks higher than all European sovereign debt markets, and trails only US Treasuries and Japanese government bonds. Thus, simply based on size…the gold market can provide significant depth and liquidity for large reserve portfolios, as it is only surpassed in size by two sovereign debt markets (US and Japan).”

Gold is the third largest reserve asset held by the world’s central banks, behind only dollar and euro denominated assets. The financial market for gold is so large, its only logical comparison is to the sovereign debt markets of other countries. Given that sovereign debt backs sovereign currencies, this places gold on the same playing field as currencies.

Additionally, the depth of the gold market and its liquidity are nearly unparalleled. Average trading volumes for gold rank among the largest financial assets in the world. They’re actually greater than most sovereign debt markets, excluding only US Treasuries. These figures don’t even paint the entire picture, since they represent only the movement of physical gold trades. Bullion banks and firms often net trades against one another, under representing the true volume. According to the WGC:

Many dealers estimate that actual daily turnover is an absolute minimum of three times the amount of transfers reported by the LBMA and could be upwards of ten times higher. This would put global OTC trading volumes anywhere between $67 and $224 billion. Using the more conservative estimate of $67 billion means that average daily trading volumes in gold are larger than the UK gilt market and the German bund market combined.”

In addition to exceptional market depth, the gold market is extraordinarily liquid, boasting some of the tightest bid-ask spreads. (Tight spreads means minimal transaction cost for getting into or out of an asset. Whereas wider spreads indicate a greater cost to investors.) Average spreads in the global OTC gold market range anywhere from 50 to 85 cents per ounce. Depending on the dollar price per ounce, it comes out to be around 0.04% to 0.07%. Once again, only the market for US treasuries can boast spreads as tight as gold.

Conclusion: Gold Is a Big Deal

The gold market is clearly one of the largest and most important financial markets in the world today. That trend is growing, not declining, as many in the mainstream financial media would have you believe. Gold is neither barbarous, nor a relic. The breadth, depth, and liquidity of the global gold market attest to this fact.

The only markets comparable to gold are sovereign debt markets. This is quite significant, because sovereign debt is a very different type of asset. Debt markets are subject to downgrades in quality, risk premiums, and ultimately default.

The WGC describes the contrast between these two markets quite eloquently.

The gold market is simply the market for gold. It is the highest quality asset traded on such a scale. In other words, gold is far and away the safest money available today. If you don’t own gold already, you may want to consider getting your hands on some.

We’re living through a unique period of history when it comes to global debt, monetary policy, and attitudes towards gold. The yellow metal is not just an important financial asset, it’s also an essential store of value during troubled times. Gold’s importance in global financial markets is just one of many reasons why investors are buying it today. Learn about them all in our free special report – Why Buy Gold Now?. Download it for free here.

Dickson Buchanan Jr. is the Director of International Development and a Senior Precious Metals Broker at SchiffGold, Peter Schiff’s Gold and Silver Bullion Company. He holds a M.A. in Economics from King Juan Carlos University and regularly contributes commentary and analysis on gold and financial markets. You can contact him directly at 888.465.3160 ext. 112.